Letters Aloud was founded in 2013 by Paul Morgan Stetler as a way to connect a live audience to famous (and infamous) historical figures through their intimate correspondence.  We’re also intensely interested in exposing modern audiences to a rapidly disappearing form of communication—the written letter.  The eloquence, pathos, and individual experience of history captured in letters is intriguing, instructive, and often hilarious.

Letters are what history sounds like when it is still part of everyday life.
—Lisa Grunwald and Stephen J. Adler
Letters of the Century: America 1900-1999

Each show brings together letters from every era, curated to explore a central theme.  Sounds academic—but the way we do it, it’s addictive.  As one fan said, “It’s like literary crack.”  With live musical accompaniment and a dynamic slide show, a Letters Aloud evening is guaranteed to inspire!

“…a masterful job bringing [letters] to life through accent and attitude. I grinned all the way home!”
– Denise Wilhelm, Delta Wind

“I loved the blending of the letters, the pictures, and the music – well done!
–Kodiak audience member

“Inspired. Laughter and near shedding of tears as we absorbed the letters.”
– Kodiak audience member 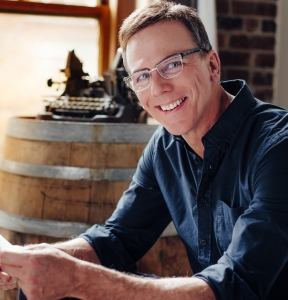 Paul is the creator and curator of Letters Aloud and a co-founder (and former Co-Artistic Director) of Seattle’s multi-award winning New Century Theatre Company. A well known Seattle actor, Paul has appeared on numerous local stages over the past 20 years, including ACT Theatre, Seattle Repertory Theatre, Village Theatre, Seattle Children’s Theatre, Intiman Theatre, and Empty Space Theatre, as well as numerous regional theatres across the country. He holds a BA in English Literature at Cal State Northridge and an MFA in Theatre Arts from Penn State University.

Jamie is a leader in the local performing arts arena, with a particular focus on organizational and community relationship development. She currently serves as the Director of Development at the Seattle Repertory Theatre and as an adjunct professor at Seattle University. Previous professional experience includes Director of Advancement and Communications at Edmonds Center for the Arts and Managing Director of New Century Theatre Company (NCTC), where she is also a co-founder. She received her MFA in Arts Leadership from Seattle University in 2010.